Graeme Thompson, the National Performance Director for British Water Polo,
has set out his agenda for the Rio 2016 Olympic cycle as he begins his
tenure at the helm.
Thompson joined British Swimming in April 2013 and has been tasked with a
key objective to build on the progress the team has made in the past few
years, qualifying for the European Championships for the first time in 15
years in 2012 and the experience gained from competing at the London 2012
Olympics…. [Read More]

Last night our Under 15s played their Eastern Waterpolo League away match against the Paddock Piranahs u15s at Bishops Storford. I would like to congratulate all of players who secured a 10-4 victory.
Piranahs took an early lead in the 1st quarter going 1-0 up, then SC torpedoes pulled one back
with Conall scoring the first of his six goals. The first quarter finished 1-1.
Into the 2nd quarter with three more goals from Conall with only one in reply from the Piranahs saw the Torpedoes have a 4-2 lead at half time.
Then Conall continued to lead the way in the third quarter scoring two more making his total for the match six, before the other players began to find the back of the net. … [Read More]

The next set of matches take place on Sunday, May 12th, 2013: This is the first tournament of the LADIES SUMMER LONDON LEAGUE @Whitgift School Croydon. All parents welcome to come along and support! Matches start at 4pm onwards so meet at 3pm in order to have a team talk and warm up dry side. 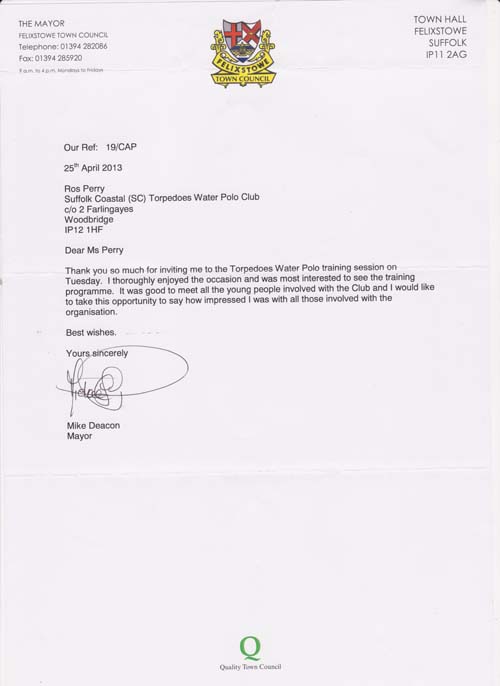