I am pleased to annouce that Suffolk Coastal Torpedoes Water Polo Club has been awarded a small grant £100 from Woodbridge Town Council to help with equipment costs. (Balls, Hats, cones etc).

We would like to thank Woodbridge Town Council for their support by awarding us this grant.

Again thanks to Ros for co-ordinating, submitting various grant applications on the clubs behalf. 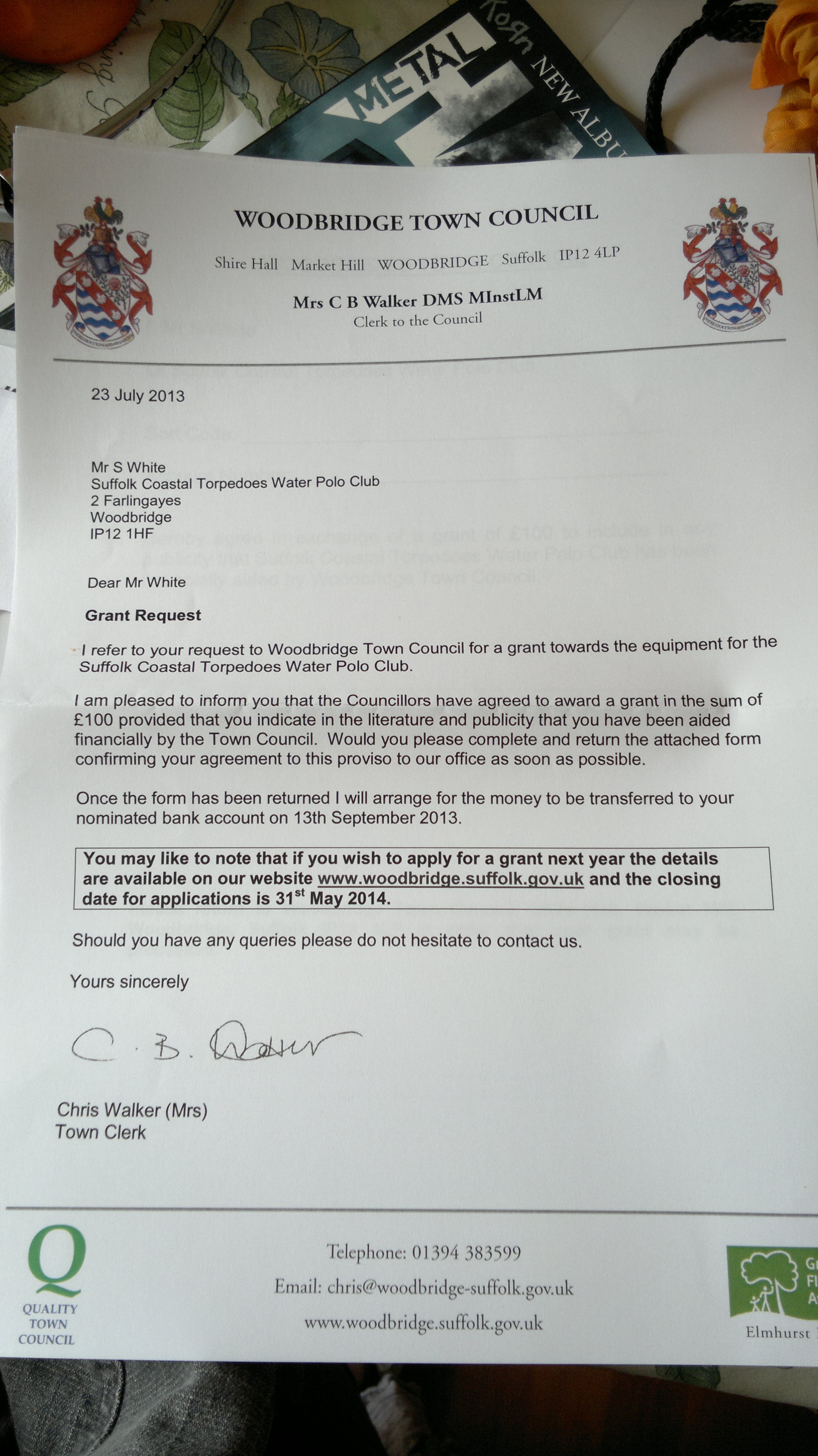 Did you know that the FINA world championships are being held in Bacelona right now?

The womens GB team are competing at this event you can keep up to date with news on their progress on the British Swimming Water Polo page.

And if anyone ever suggests we should keep match stats this detailed at our level please have them “dunked!”  – Can vrs GBR Play by play summary

While Britain’s female water polo players will receive a record £4.5m in Lottery funding in the run-up to  Rio, their unfunded male counterparts are facing up to life on a shoestring budget. Roger Guttridgetalks  to the men charged with managing these contrasting situations.

You can read the article here.

We knew from the home game at Crown Pools Colchester were a powerful side, but on arrival at Colchester on Sunday evening we spotted they had a good number of players described by some parents poolside – “built like a brick ………..” .

Colchester won possession at the start and immediately attack the Torpedoes goal scoring first of many for their No 7.  SC Torpedoes hit back with a goal from James, they then got another couple before Rufus got on the score sheet with his first goal. Colchester used their power to score three more despite some excellent defending from Kirsty and Pheobe’s excellent goal keeping. So 6-2 down at the end of the 1st.

Into the second, Colchester continued to dominate scoring 4 more with only one in reply from Robert for torpedoes. 11-3 down.

After the break Colchester rested a couple of their “leviathans”, this gave the SC Torpedoes players more time and space to play some really good attacking water polo resulting in 3 goals for James and 2 for Rufus with only one in reply from Colchester.  That had narrowed the score to 12-8. Only 4 goals in it.

Realising Torpedoes were getting the upper hand, the leviathans were put back into the water and they forced two more goals before the end of the quarter ending finishng 14-8.

Well done to all our players all gave 110% but again the victory eluded them. So that is for competitive matches now for summer, the next match for U15s is 27 Sept at Crown Pools against Bishops Storford.