This is probably the best news of the week.  When we started our Junior and Inter sessions at Felixstowe we hoped we could raise enough money to purchase goals to use at that pool.  A pair of goals would cost just over £2000 – significant investment! .

Many of the committee members have been involved helping Ros Perry pull together funding applications and hosting councillors to secure local authority funding.

One of our applications has succeeded!. … [Read More]

A BIG THANK YOU to everyone that collected the Sainsbury’s Active Kids Vouchers and passed them to Sue. We collected enough to order three water polo balls, a ball bag and equipment storage boxes.

Congratulations our players Pheobe Vale, Jess Temple, Kirsty Logan, Lauren Kirby, and Faye Hermon for being selected to represent the East Region along with girls from other clubs at next month’s Youth Girls Inter-Regional Championship.  The competition will be held at Walsall Gala Baths on 13-14 July. 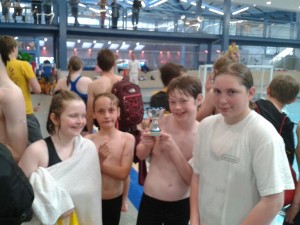 No not the Marvel comic book superhero’s but rather the story of how four of our players contributed to a team bearing the SC Torpedoes name securing it’s 1sttrophy.

The SC Torpedoes had planned to enter an U13s team in a 5 team tournament hosted by Ipswich at Crown pools.  Whilst sorting out the teams last week we were struggling to get a full side to compete due to larger number of players than anticipated having other commitments. So the committee made the hard choice to withdraw from the ournament.

It appeared that we were not the only team struggling and two other teams also withdrew. The organisers could not cancel the pool booking so late on Thursday the suggestion was to offer this as an informal session with all teams bringing as many players  as possible, they would be mixed up and play in a fun tournament.

We made this option available to our players if they wanted to still play polo we would take them down.  Felix Church, Billy Vale, Erin Scarce, and Sophie Johnson decided to give it a go.

As we arrived at Crown Pools on Saturday night things took an unexpected twist –it appeared that the 4 players (three inters and 1 diddy) were expected to play as the SC Torpedoes team borrowing players form other sides. I had only expected to chaperone our players not organise our players and others poolside. GULP!

I have to apologise as was not able to keep score or record who scored, I was a bit busy!.

What I can remember is

The thing that stuck out for me is that the players in the water did not care what badge/name was on their trunks/club t shirts. When they were in the water their team mates were the players wearing the same colour hat as them and they wanted to beat the team that was wearing the other colour.

Another thing I remember one is Billy Vale’s laugh when he diverted a goal bound shot to the side of the post which landed with huge splash soaking me. It must be something in the Vale genes – in goal Billy was making amazing saves that we are more used to seeing his sister Pheobe making.

So played three – won two – I had no idea what had happened on the other matches so the surprise for the 4 players and myself was at the end  that SC Torpedoes would be presented a trophy for being runner up on the night.

Although the event was not without it’s hiccups, on the night those that were there enjoyed some frenetic polo matches and all the players had smiles on their faces.  We do need to encourage and support this type of event because with new players in both Inter and Diddy squads the number of players in this age group is growing so next time we can field stronger sides.

So well done to our “fantastic four”